Michiko, or the Geisha, is one of 20 Hunters

The Geisha is a dashing Hunter, who can dash through walls and obstacles to quickly close gaps between her and survivors.

With her Triple Phases trait, she has three different forms.

Her first form is Beauty form. While in this form, she is calm and has her mask off, she moves faster and has a smaller fear radius. Interactions with the environment will lead to her second form.

She will change into Prajna form if she attacks, uses skills, goes through Priestess's portals or breaks pallets, but she won't change forms if she vaults over windows or uses telephone booths in Pack Hunter mode. While in the Prajna form, she will put her mask on, have a huge fear radius and will have a lower movement speed. Due to that, she will unable to catch up to survivors quickly.

Her third form is Panic form. When the survivors stare at her, she panics and uses her fan to cover her face. This activates her speed debuff and makes her unable to use her skills. Her movement speed in this form is very slow but still quicker than survivors.

Her ability Dash Hit allow her to quickly dash towards a survivor and close the gaps between her and the survivor. She can also go through walls and obtacles while dashing. If the survivor stares at her while she is dashing, she will stop, and the skill will be reset.

Her second ability, Soul Departure allows her to float in the air. She can use this skill to find survivors and dash to them quickly. This skill is also great for camping, just floating in the air and wait for the survivor to go rescue the chaired and then attack them while falling down.

The Geisha, Michiko, used to be an amazing dancer. When she danced in a kimono, it looked like a red butterfly flapping its wings. But now, no one can watch her performance anymore. Michiko is lost. No one can find her. Not even herself.

“For a beautiful woman who lives in a foreign land, the only way to protect herself maybe ... to obtain enough power. Gentle treatment will only make roses wither. But nutritious water can make roses last longer” —Michiko (Lady 13 limited season 10 skin quote). 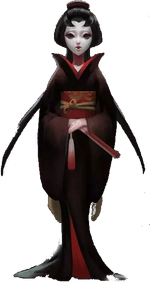 Michiko was once the best dancer in Yoshiwara, and it was claimed that when she dances it looks as if a red butterfly was gently flapping it's own two wings. Michiko, however, gave up everything to marry her true love Mr. Miles. The Geisha met Miles, a foreign army officer at a banquet where they fell in love soon after. She was curious and excited as a kid on this foreign land, but only found the marriage to be the beginning of the miseries. After they got married and returned to Miles’ homeland together. His father was particularly vocal in his opposition to their marriage. He was cynical of her and hoped to drive her out of the family home. Not long after, Michiko mysteriously disappeared after Miles left on a business trip. Miles' father claims that she ran off with another man and urged his son to find another wife. Little do Miles know that his own father murdered the love of his life (Michiko). Without knowing, Miles, however, started to search for his wife, Michiko, but no one knows where she went. Rumor has it that a woman in kimono always wanders at night near the Miles’. Her face is so scary and scarred, but when she dances, it’s like a red butterfly.[1]

Geisha has four Abilities that are unique to her.

All completed Objectives reward the player with +335 Logic Points

for the Logic Path

Dear Mr. Donnelly: It has been six months since we last met, and I wonder how you have been doing?
I have secured and stored the item you placed under my care to avoid unwanted attention.
However, the expenditure to relocate the item has exceeded my savings. Therefore, I humbly ask you to offer additional funding to finance the storing fee.
On the other hand, I have overheard about an unsettling investigation on your son. Please reply to this letter at your earliest convenience to evade further conflict.


I wish you good health.