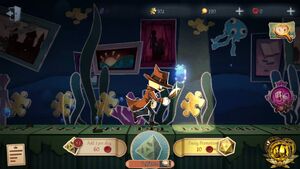 rewards. Appears to be related to the "Muse and Inspection Club." Players can roll dice to earn Clues

There are a total of 4269 spaces holding different items which can be advanced to depending on the toss of the dice.

1000 Logic Points will automatically gain the player 1 4-sided dice. The die can be rolled to progress on the logic path. By pressing and holding the dice button, the player can roll up to 10 dices in one go. A maximum of 100 4-sided dice can be stored every season and transferred to the next season. Players can purchase the '4-sided dice enthusiast' for 60 Echoes

, which provides the player with 4 4-sided dice instead of 1 every day for 30 days, or a month.

Players can see how their progression stacks up to their friends.

once per day. This will automatically roll a 20-sided die. During Dash-Hit, all 20-sided die will not roll numbers lower than 15.

Memory Spheres can be obtained by opening the ones dropped from the path, or by exchanging with 488 Clues

Seasonal Essences are obtained by opening the ones dropped from the path, or by exchanging with 96 Inspirations

Community content is available under CC BY-NC-SA 3.0 unless otherwise noted.